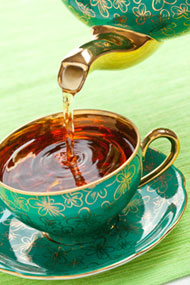 “Drinking three or more cups of tea a day is as good for you as drinking plenty of water, and, may even give you extra health benefits” say researchers.

The work in the European Journal of Clinical Nutrition, whilst dispelling the common belief that tea dehydrates, confirms the fact that tea re-hydrates just as well as water does. But more importantly, UK nutritionists found that it can also protect against heart disease and some cancers.

Experts believe that flavonoids are the key ingredients in tea, which promote good health. These polyphenol antioxidants are found in many foods & plants, including tea leaves, and have been shown to help prevent body cell damage.

Dr. Carrie Ruxton – Public Health Nutritionist and colleagues at Kings College London – looked at published studies on the health effects of tea consumption. They found clear evidence that drinking three to four cups of tea a day can cut the chances of having a heart attack. Claire Wiiliamson of British Nutrition Foundation too confirms the potential health benefits of tea drinking. Other health benefits seen included protecting against tooth-plaque and potential tooth-decay, plus, bone strengthening.

Dr. Ruxton explained, “Drinking tea is actually better for you than drinking water. For, water is essentially replacing fluid loss. Tea replaces fluids, and contains antioxidants. So it’s got two things going for it.”

There was no evidence that tea drinking is harmful to health. However, research suggests that tea can impair the body’s ability to absorb iron from food, meaning people at risk of anemia should avoid drinking tea around meal times.